THIS JUST IN—Voters in Missouri will have the chance to vote on ranked-choice voting. Organizers of the ballot initiative have submitted the required number of signatures!

This comes on the heels of Maine adopting open primaries statewide. This is solid evidence that, even while some states are blocking electoral reform, others are moving FORWARD. The bill allows unaffiliated voters to participate in primary voting beginning in 2024, and that’s real progress in representation for the 36% of Maine voters who, as independents, have been excluded up to this point. Congratulations to Maine!

Author Lawrence Jacobs writes, "[T]he widespread adoption of primary elections in the 1970s have distorted and weakened our democracy by creating a perverse incentive structure that rewards playing to unrepresentative extremists."

Incentives are key, and in Jacobs’ book, Democracy Under Fire, he asks, “Why is there no political incentive for elites to elevate country above party?” Layla Zaidane, the President and CEO of the Millennial Action Project, says that the key to fixing political polarization is in the primaries.

Reforming our primary system is a key policy on the Forward Party platform. We need to get the incentives right.

The Forward Party aims to bring people together. It’s hard to do that when all our incentives and political systems thrive on division. Polarization is baked into our politics and media, creating tribes where unrelated issues get bundled, leaving little room for independent thinking.

Partisanship is tearing down the institutions we count on. In Breaking the Two-Party Doom Loop, Lee Drutman explains that our “Framers saw the danger of strong parties turning politics into bloodshed.” And we're starting to see that today.

Today, just 39% of Americans trust the media. With the vitriol and frequent emphasis on extreme views, it’s no wonder our trust is so low.

Why is there such a focus on these extreme views? Because the incentives push in that direction. The media knows that engagement is higher on stories framed this way, and higher engagement means higher profits. This is a problem since we know the media can shape the way Americans view the world.

Polling reveals that anxiety over the economy, the number one concern of Americans today, is significantly higher than that of personal economic well-being. The perception of the economy is driven by media coverage that, depending on your news source, may emphasize the very real effects of inflation, especially on low income families, or the good news on job growth and the federal deficit. Two very different stories and tones, and each one creates a very different view in the reader. 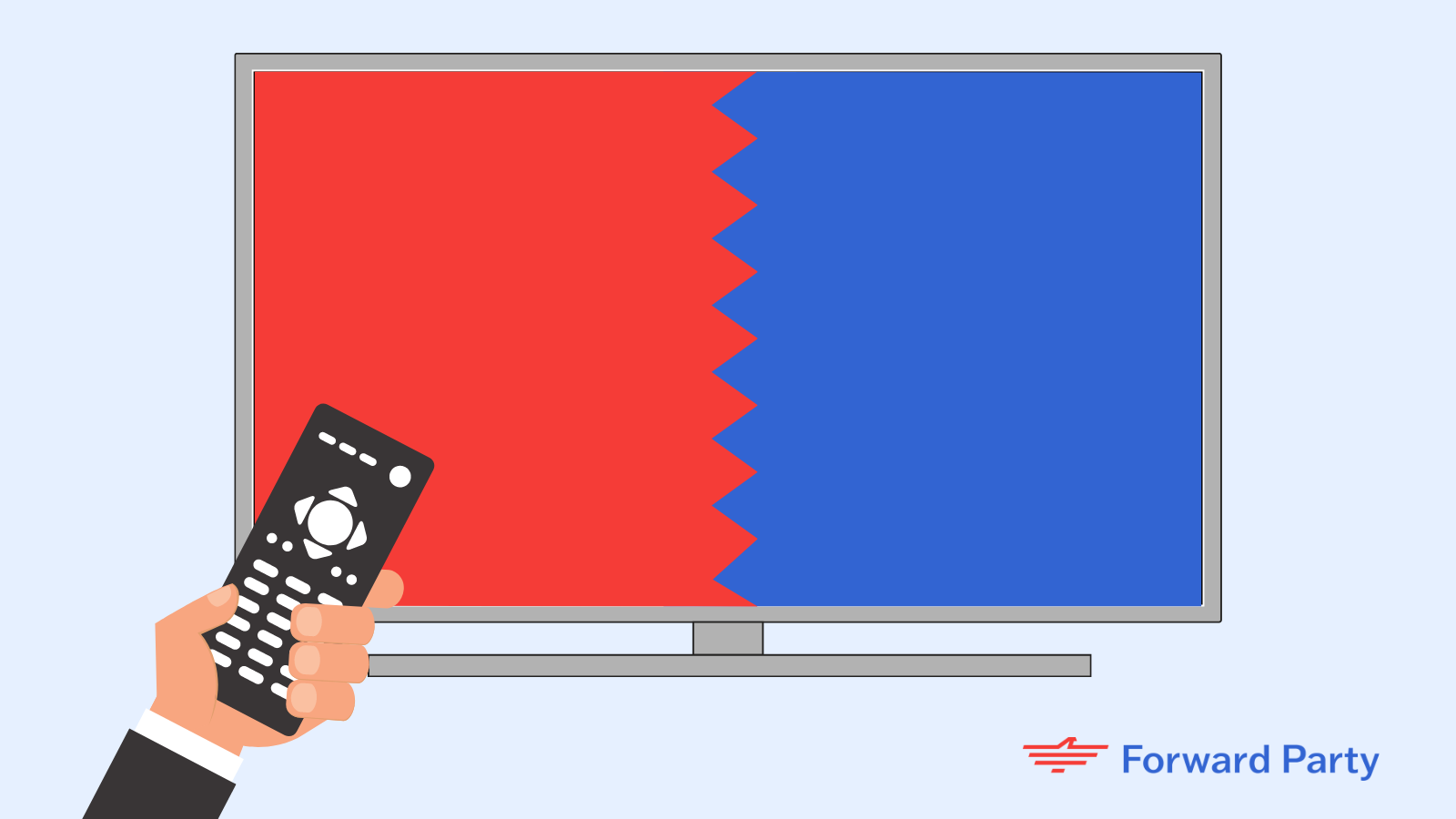 Given the power of the media, it’s not surprising that each side has a strong opinion as to how to promote standards for fairness. Conservatives have focused on the issue of liberal bias in Big Tech moderation (see below), while liberals have spent a lot of time on fact-checking. But it's easy for that to go too far, as we saw when the Biden administration created a Disinformation Board, which members of the media from across the political spectrum labeled “the truth police.”

Media is driving the narrative on both sides. Access to unbiased, independent news is neither guaranteed, nor prioritized, by either party. Though journalists have an ethical obligation to tell the truth, political commentators on popular cable news shows can fall back on the “I’m not a journalist” excuse.

And their views sell, which incentivizes those making decisions on what to publish to put more of it out there.

While this is going on, social media is pouring gasoline on the fire.

The incentives here are similar to those of traditional media—more engagement. And the companies behind these platforms know that more extreme views get more of a reaction, building their algorithms to focus on these statements. These popularity-based algorithms tailor content to maximize user engagement, and thus drive us further apart.

As noted above, conservatives have focused on censorship on these platforms due to what they perceive as a liberal bias. However, despite the different reactions to Elon Musk's purchase of twitter between elected Democrats and Republicans, an overwhelming majority (68%) of Americans believe it is a good thing. With his public stance against censorship and in favor of free speech on the platform, it would seem that most Americans think open discourse is better for us all.

Winning elections has become more important than winning ideas. The problem is systemic. It’s all about Team Red or Team Blue. Presidential approval ratings in the 21st century are at historic lows, a sign of the increased polarization of the nation. Parties use any tool at their disposal to set the stage for a win.

Given the significance of the media in politics, both parties are looking at how to gain the upper hand. Politicians divide us on culture, geography, political party, and demographics, looking for the winning angle, no matter how bad it is for the country.

And underlying all of this is the incentives that drive politicians towards the political extremes, starting with party primaries.

In these primaries, Independents are shut out from voting in most states. And as the parties get more extreme, more moderate members of each leave the party. Since only the most partisan 10% of voters vote in most party primaries, and these parties are losing the more moderate members, it only makes sense that more partisan candidates will make it through. And so even the more reasonable candidates have incentives to take up more extreme positions to appeal to these primary votes.

THE FORWARD PARTY IS ABOUT SOLUTIONS

Luckily, there is a path forward. We can overcome the current polarization and move Forward if we return to common-sense legislation and restore the spirit of compromise.

Writer and retired U.S. Navy commander, Theodore R. Johnson, wrote: “Too often, legislation on the issues Americans care most about—health care, education, immigration, taxes and the economy, gun rights, voting rights, abortion—becomes an occasion for partisan purity tests rather than an opportunity to continue perfecting our Union. There is little room for negotiation and compromise, and little reward for men and women of principle who disagree with the party line to instead vote with their consciences or their constituents.”

The news in Maine is heartening. Open and nonpartisan primaries are one step in getting the incentives back on track, but we can't trust the existing parties to reform themselves. They haven't yet, and there's no sign that they're trying to.

Because of this, the Forward Party's success is urgent. Our solutions are urgent. Spread the word. There is a political home for political integrity and problem-solvers. For Independents and rational thinkers. For those who want not what's best for their party, but for their families, their neighbors, and their country.

Sign in with or
Don't have an account? Click here to create one.
Please check your e-mail for a link to activate your account.
Newsletter 5/12/2022
Newsletter 5/12/2022
@Fwd_Party is fighting for the American people with practical, common-sense solutions. Join us on the most critical mission of our era - building the foundation for a representative and stable democracy. Not left. Not right. FORWARD.