Here’s a riddle for you: how is it that the US Congress has just a 20% approval rating and yet 94% of congressional seats are considered “safe” this election cycle?  If people dislike congress so much, why aren’t they electing new representatives?

Let’s work backwards.  As we learned above, this year as many as 94% of congressional seats will not be seriously contested at the general election.  That’s because those districts have been gerrymandered so well that when November rolls around, the districts are either so deeply blue or red that the opposition doesn’t stand a chance.

Partisan primaries are primaries in which only registered party members can vote, and they are used to select a single candidate for the party to put forward to the general election. 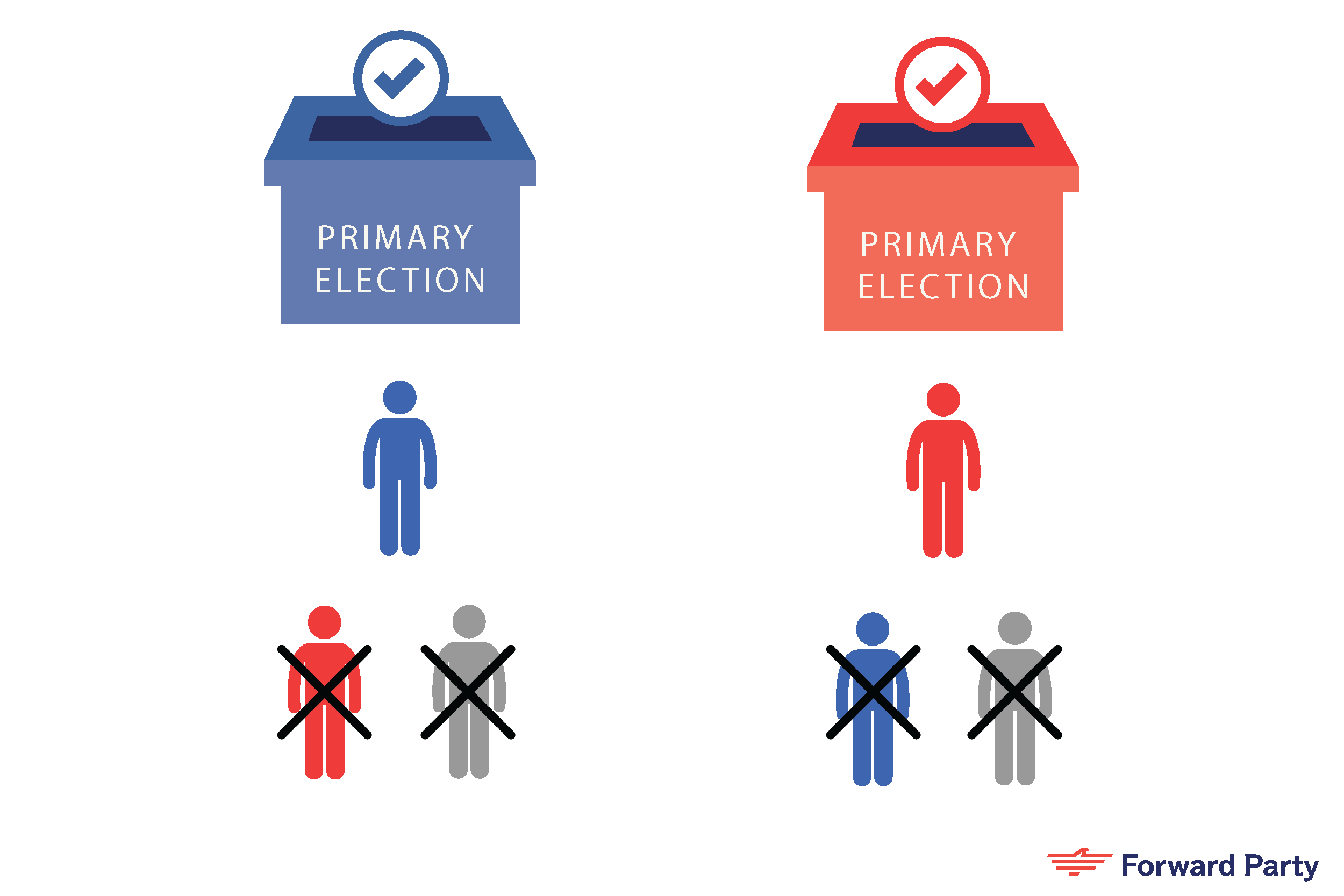 There are two issues with partisan primaries.

First, they disenfranchise millions of voters.  Because partisan primaries are closed to everyone not registered in that party, no independent, unaffiliated, third-party, or other major party voter can participate in the election.  In a district like the ones described above where the general election is nearly guaranteed, that means that these voters have next to no actual say in who represents them in their government.  This is the antithesis of everything it means to be American and to have the right to vote.

Further, partisan primaries also help deepen polarization.  Only about 10% of eligible voters vote in most primaries, and they’re the most dedicated partisans in their respective parties.  Because most elected officials only need to worry about winning their primary with this 10% of extreme partisan voters, the incentive for these legislators is to become more partisan to appease this small portion of their base that really controls their election.  You’ve probably heard the phrase “being primaried.”  When people say that, they’re talking about this phenomenon - someone running against a candidate in a primary and moving either further right or left of them in order to win the favor of the hyper partisans who vote in primaries.  This practice is part of the reason our country is so polarized, and it happens in a process that excludes most of us from being able to stop it.

Partisan primaries leave out massive swaths of the population from the ability to vote.  In the overwhelming majority of districts, gerrymandering has assured candidates that the general election is already decided and that all the candidate needs to do to win a seat is to win the primary.  With so many voters disenfranchised from primaries, it falls to a small portion of each party’s most extreme voters to decide who wins each primary.  To secure this support, legislators run to the extremes to ensure they win their primaries.  This results in ever-deepening polarization and ever-worsening representation for the average American.

Partisan primaries have got to go.

The Forward Party supports open, non-partisan primaries that let all voters decide who gets to be on the general election ballot—and we think you should too.  If you agree, donate to the only national political party dedicated to fixing our democracy from the ground up.

Sign in with or
Don't have an account? Click here to create one.
Please check your e-mail for a link to activate your account.
Non-Partisan Primaries - What's the Deal?
Nonpartisan Primaries - What's the Deal?
@Fwd_Party is fighting for the American people with practical, common-sense solutions. Join us on the most critical mission of our era - building the foundation for a representative and stable democracy. Not left. Not right. FORWARD.