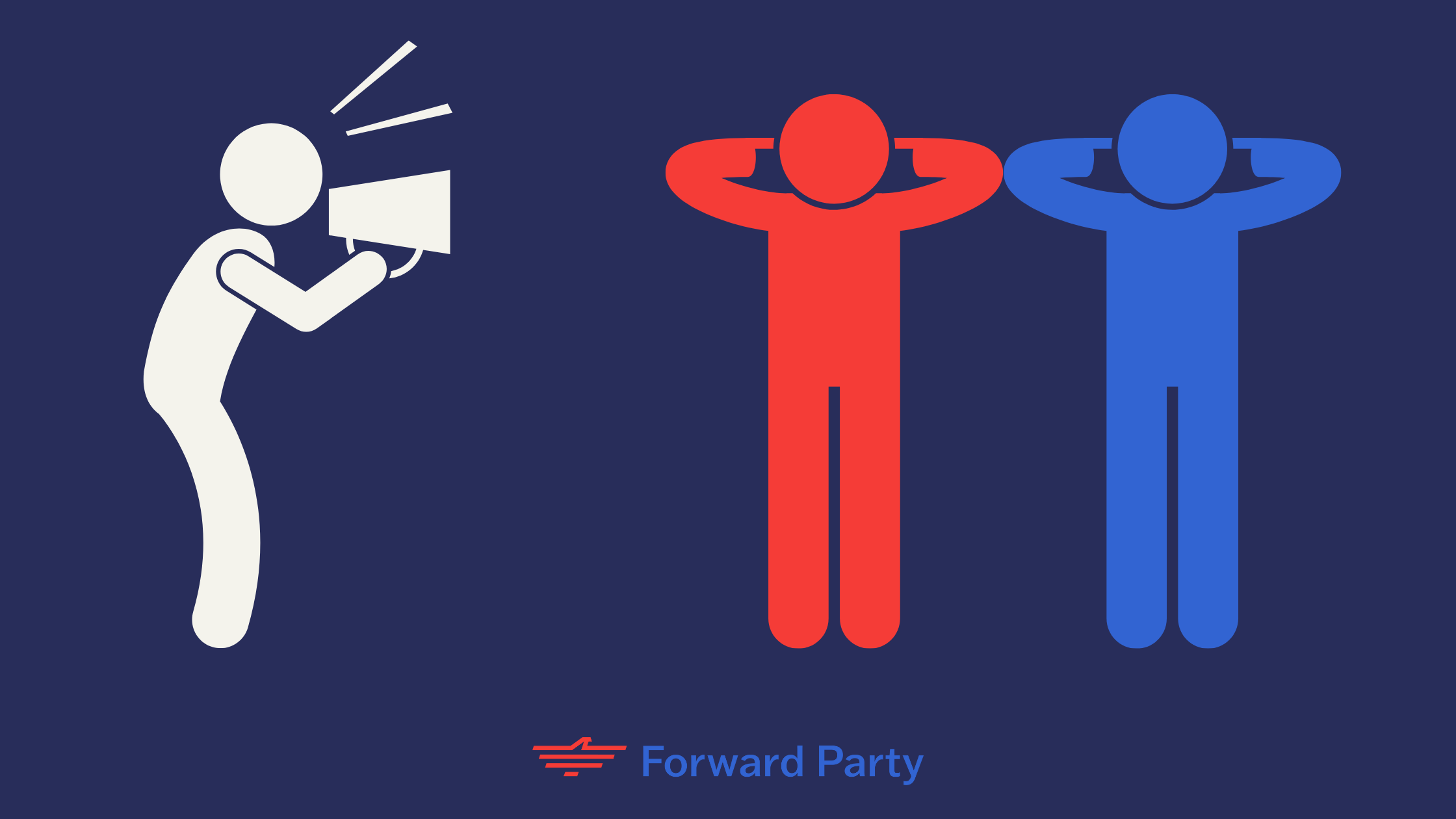 Voice is one of the key metaphors for representation in our culture.

We voice our concerns. Our vote is our voice. We are urged to find our voice. We lift our voices. We even teach our children to use their voice - sometimes, their inside voice.

The Forward Party is driven by the mission to give a voice to all Americans. Partisan traditionalists would have us believe that we all have a voice, but having a voice isn’t just about speaking. It’s about being heard.

Do you feel heard?

At least 62% of Americans don’t—they support a third party, because they don’t feel heard by the existing parties.

And yet third party candidates face nearly insurmountable barriers to ballot access, fundraising disadvantages, and are frequently forced out of the race for fear of “spoiling” it for one of the two major parties.

Rather than embracing competition in politics, the two-party system has been unwilling to make reforms to represent these 62% of Americans. And they put in place hurdles that relegate third parties to a sort of political bogeyman, helping them convince this majority of Americans that the third party they want can’t happen.

This collective illusion created by the two major parties has hijacked our ability to make meaningful change—change that is critical to solve the massive problems we’re facing. Our healthcare is a mess, our schools are crumbling, crime rates are increasing, and our debt is out of control.

We all know this, and yet our leaders can’t come together to fix these problems.

The never-ending fight between Democrats and Republicans is doing nothing to make our lives better. None of this partisan warfare helps Americans who are struggling economically, with the recent surge in inflation only making things worse. Most Americans were living paycheck to paycheck before their dollar bought them less at the supermarket.

We have lost our voice—we’re shouting what we need at our leaders, but they no longer listen to us, because they no longer need to listen to us. They’ve rigged the system to keep themselves in power, and convinced us all that any challenge to the current system will destroy the country by throwing power to the other side. 62% of Americans want a third party, but we can’t have it because of this collective illusion.

Todd Rose, cofounder of Populace, a nonpartisan think tank, talks about the impact of collective illusions on democracy. He says, “[T]he majority thinks the majority believe something that they don't. We are all part of creating and sustaining the illusion.”

Americans are under a collective illusion, driven by elected officials from the two major parties that have convinced us they are the only viable political paths. They drive wedges between friends and families, despite us all agreeing that the country needs to solve key problems that we’re all facing.

What has been missing is a collective movement with enough force to break down the illusions.

The Democratic and Republican parties have had almost two hundred years to develop this collective illusion. This illusion has stolen the voice of the majority of Americans who are unhappy with the current parties but feel they can’t support an alternative.

We are facing a historic uphill battle. A battle against this collective illusion. A battle to replace it with a vision for a more representative democracy, one where the people regain their voice and elect politicians who actually listen.

The Forward Party is writing a new story, one that represents this majority and will give a voice to those ready for a new path. That path is not left, not right, but Forward.

Sign in with or
Don't have an account? Click here to create one.
Please check your e-mail for a link to activate your account.
Our Collective Illusion
Our Collective Illusion
@Fwd_Party is fighting for the American people with practical, common-sense solutions. Join us on the most critical mission of our era - building the foundation for a representative and stable democracy. Not left. Not right. FORWARD.