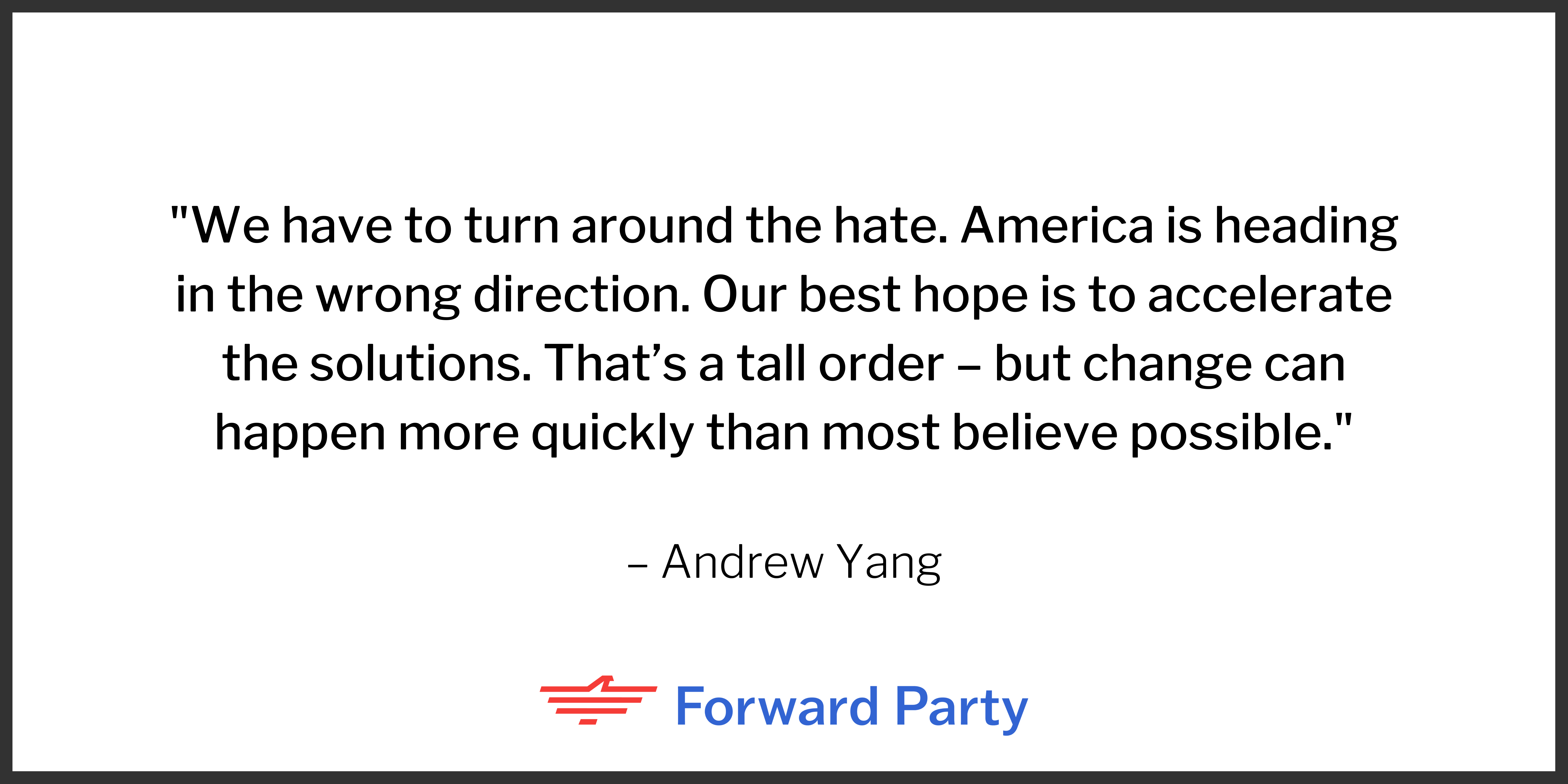 The following is Part Three of a three-part series in which we will explore how we can reverse polarization. Read Part One here. Read Part Two here. Choice, Accountability, and Solutions - How we get to a better America.

The Focus of Government Should Be Solving Problems

Let’s talk about SOLUTIONS. We need them. Period. In our current combative congress, we have a solutions problem. Polarization caused by a two-party system stands in the way of solutions-oriented governance. There is an answer to our solutions problem, and we can reform our system so that America will see a path Forward to an era of problem-solving.

The Impact of Failure

America is in dire need of solutions. Our problems just keep piling up:

These are just some of the issues America is facing—issues that keep us up at night, fraying our nerves and making elections high stakes for those eager to see problems solved.

We’re not getting bang for our buck. Each election cycle, we spend more and more hoping we might get the right leaders into office—leaders who will solve these problems once and for all. But each year, our elections hand us lemons. We spent $14.4 BILLION in the 2020 election, and we are still angry and divided.

Our elections are a long way from leading to solutions, and our leaders are more focused on turning us against each other to maintain their power than on improving our lives.

The Impact on Democracy

With all those issues weighing on the minds of Americans, it’s no wonder that a full one-third of us do not believe that elections reflect the will of the people. The two-party system has led to a level of polarization where two-thirds of Americans believe that we can’t even agree on basic facts, much less solutions. 52% of Republicans and Republican leaners think it’s ok to call Democratic elected officials “evil,” and on the Democratic side, that number is EVEN HIGHER at 57%.

Just 20% of us trust the government to do what’s right—a drastic decline from 54% in 2001 and 60% in 1968! This drop in trust coincides with a drop in bipartisan cooperation. In 1971, the nation enjoyed a high degree of confidence in the government while, at the same time, there were more than 160 Democrats and Republicans in Congress who consistently reached across the aisle to solve problems. Today, only about 53 legislators regularly work with members of the other party to pass laws.

Moderates and independent-minded legislators are disappearing. It has reached a point where Politico wrote that bipartisan legislators are on the verge of “extinction.”  Each party believes that only they have the winning solutions. Such rigid ideology is destructive because winning elections—not implementing solutions—has become the top priority.

Through increasingly undemocratic means such as gerrymandering, the two-party system is turning us against one another. The division they have manufactured is making us angry at the wrong people, and it’s seeping into every institution in America. We’ve lost sight of what we have in common because our system benefits from focusing on what drives us apart.

How can we expect solutions when Congress is locked in a two-sided partisan battle for power?  We can’t, and so of course we have grown disillusioned. To restore faith and hope in America, we must find a solution to our solutions problem.

Yes, we know, it’s a bit meta. But we have to start by solving the problems that are preventing us from solving our problems!

What problems are these?

THE SOLUTION TO OUR SOLUTIONS PROBLEM

The solution to our solutions problem is democracy reform - something we have placed at the center of the Forward Party platform.

When politics makes it impossible to get solutions, frustration grows. And this frustration leads to lack of trust in our system, anger, and violence. This will only worsen as problems continue to be  ignored.

NOT LEFT. NOT RIGHT. FORWARD. 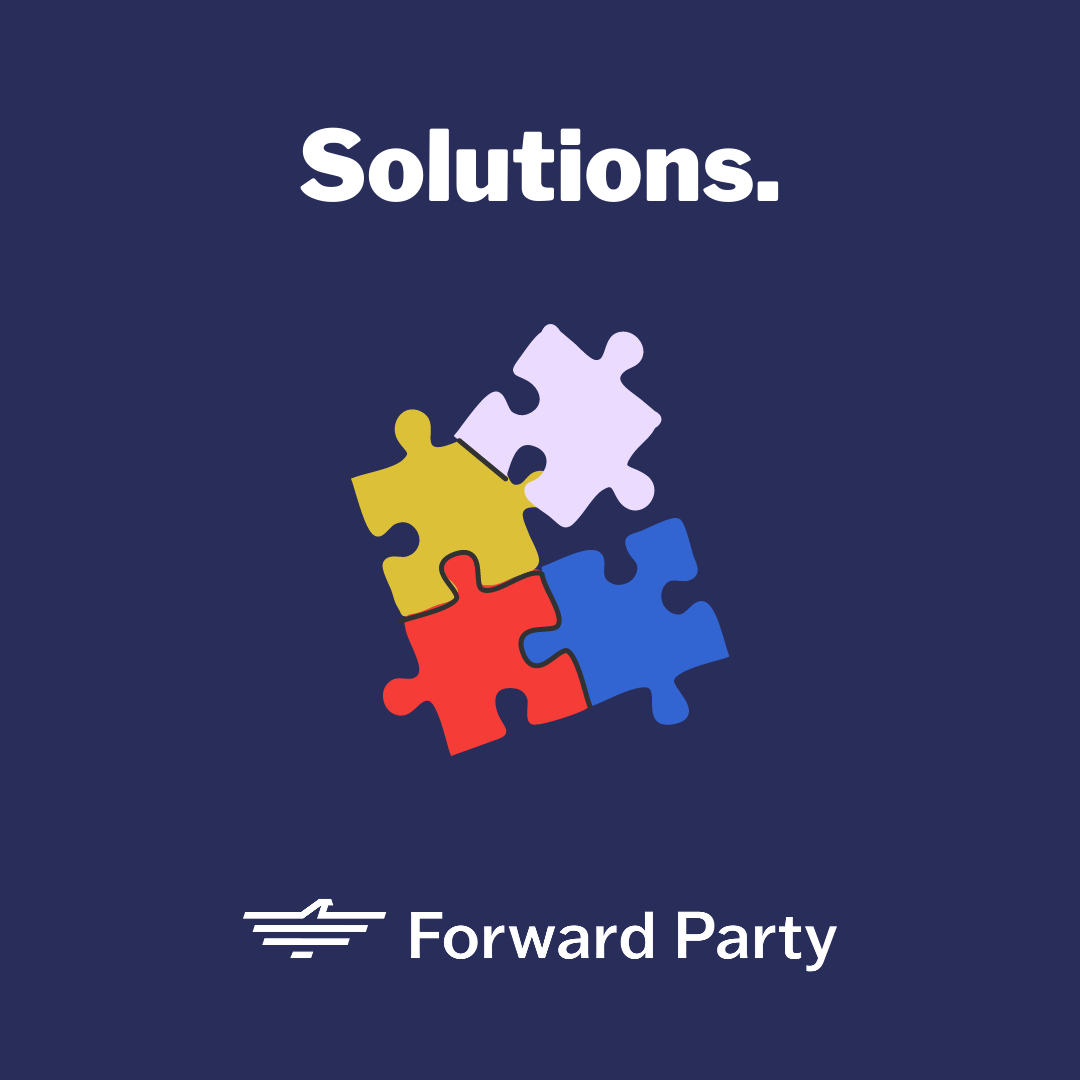 Sign in with or
Don't have an account? Click here to create one.
Please check your e-mail for a link to activate your account.
Our Government Should Be Able To Solve Problems
Solutions Matter
@Fwd_Party is fighting for the American people with practical, common-sense solutions. Join us on the most critical mission of our era - building the foundation for a representative and stable democracy. Not left. Not right. FORWARD.