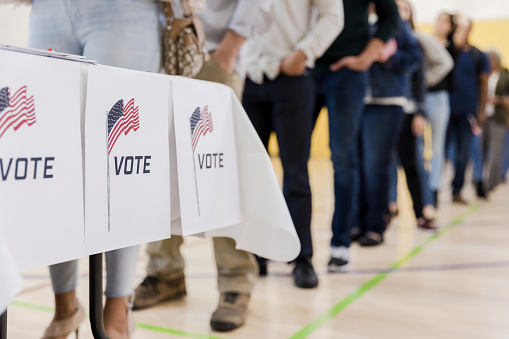 I have two questions for you.

Second, have you ever wondered why so many elections have winners who don’t get 50%?  For instance, there have been 19 elections for president that saw the winner get less than half of the votes in the country.  It also happens in congressional elections every two years.  I don’t know about you but it sure seems strange to me to have the people in power supported by fewer than half of the population.

Luckily, there’s a way to fix both of these problems at the same time: Ranked-Choice Voting (RCV). RCV is just a slight change to the way we vote, but it guarantees that winners get more than 50% of the vote every time and that you get to vote for your favorite candidate without fear of “spoiling” the candidate you think most likely to win.

But how does it work?

RCV is easy - really easy.  All you have to do is rank your favorite candidates from most favorite to least favorite and you’re good to go.  It’s like when you’re going to the store to get ice cream and your wife/husband/partner/friend says,

They say, “Then I’ll have mint chocolate chip.”

That’s it - they just RCVed their ice cream order.  We do this every day, with almost every choice we make.  Why should politics be any different?

“But how does it guarantee 50%?” you ask. “How does it let me vote for my favorite?”  RCV has a feature that normal voting doesn’t.  To see this feature, picture this four candidate race: 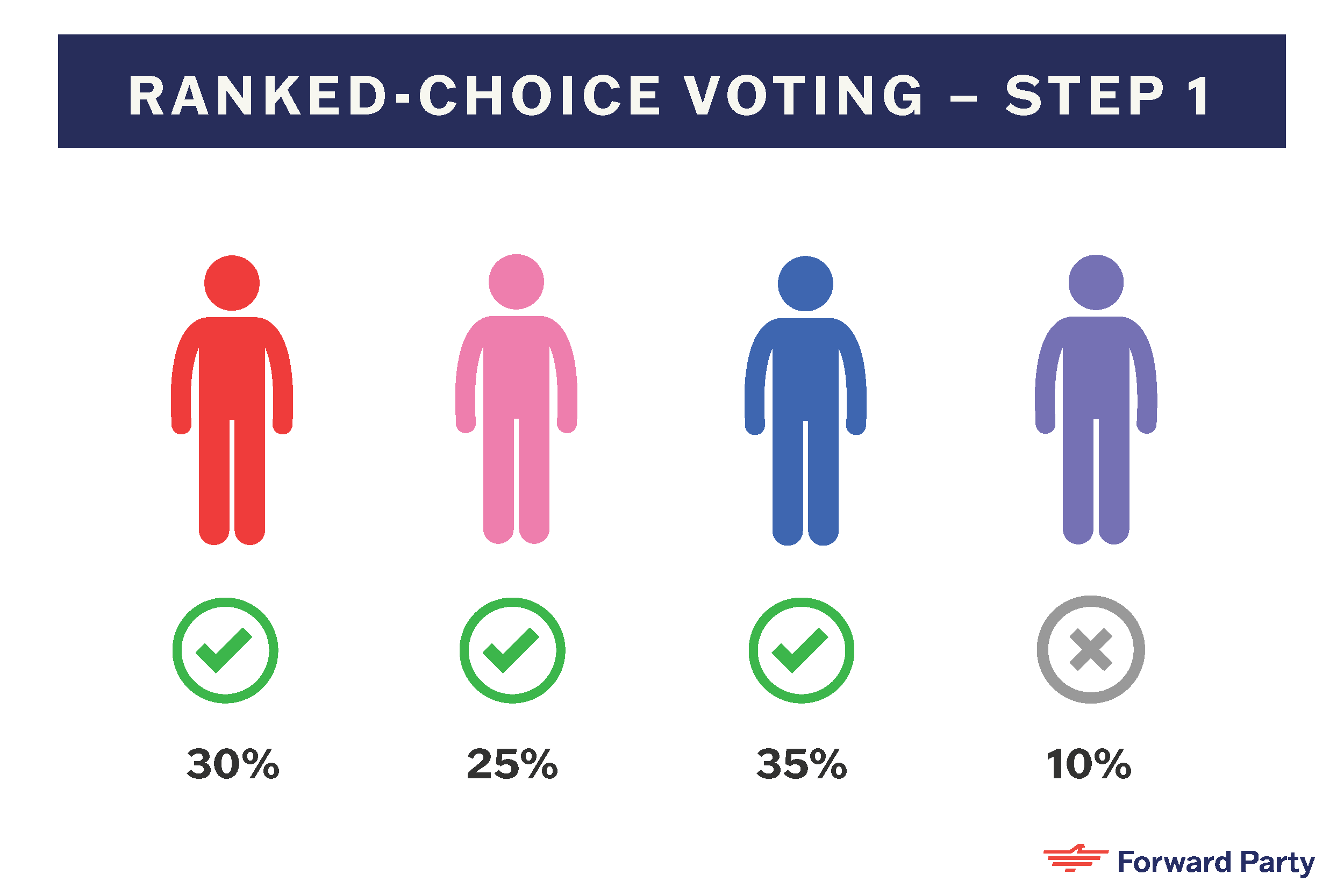 We have four candidates, Red, Pink, Blue, and Lilac.  Let’s pretend that Red and Pink have similar policies and Blue and Lilac have similar policies.  After everyone ranks their votes, Blue is in the lead with 35%, followed by Red at 30%, then Pink at 25%, then Lilac at 10%.  Because no one has more than 50%, the instant runoff function kicks in.  The last-place candidate, Lilac, is eliminated, and everyone who voted for Lilac has their votes shifted to their second favorite - let’s say they all liked Blue second best. 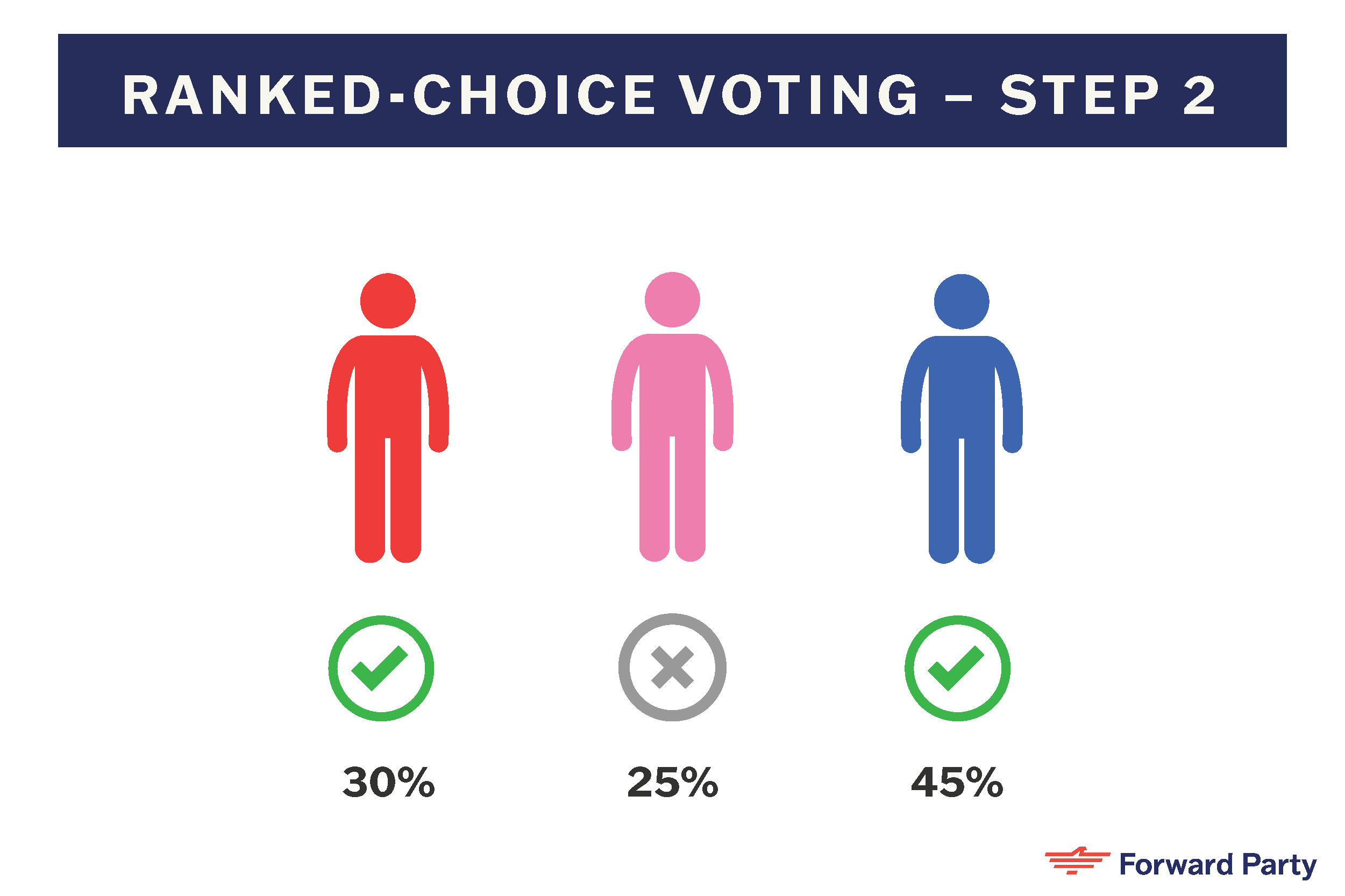 Now we have Blue at 45%, Red at 30%, and Pink at 25%, but still no majority.  So the runoff happens again!  This time Pink is eliminated and the Pink voters are moved to their second choice - let’s say they all liked Red best. 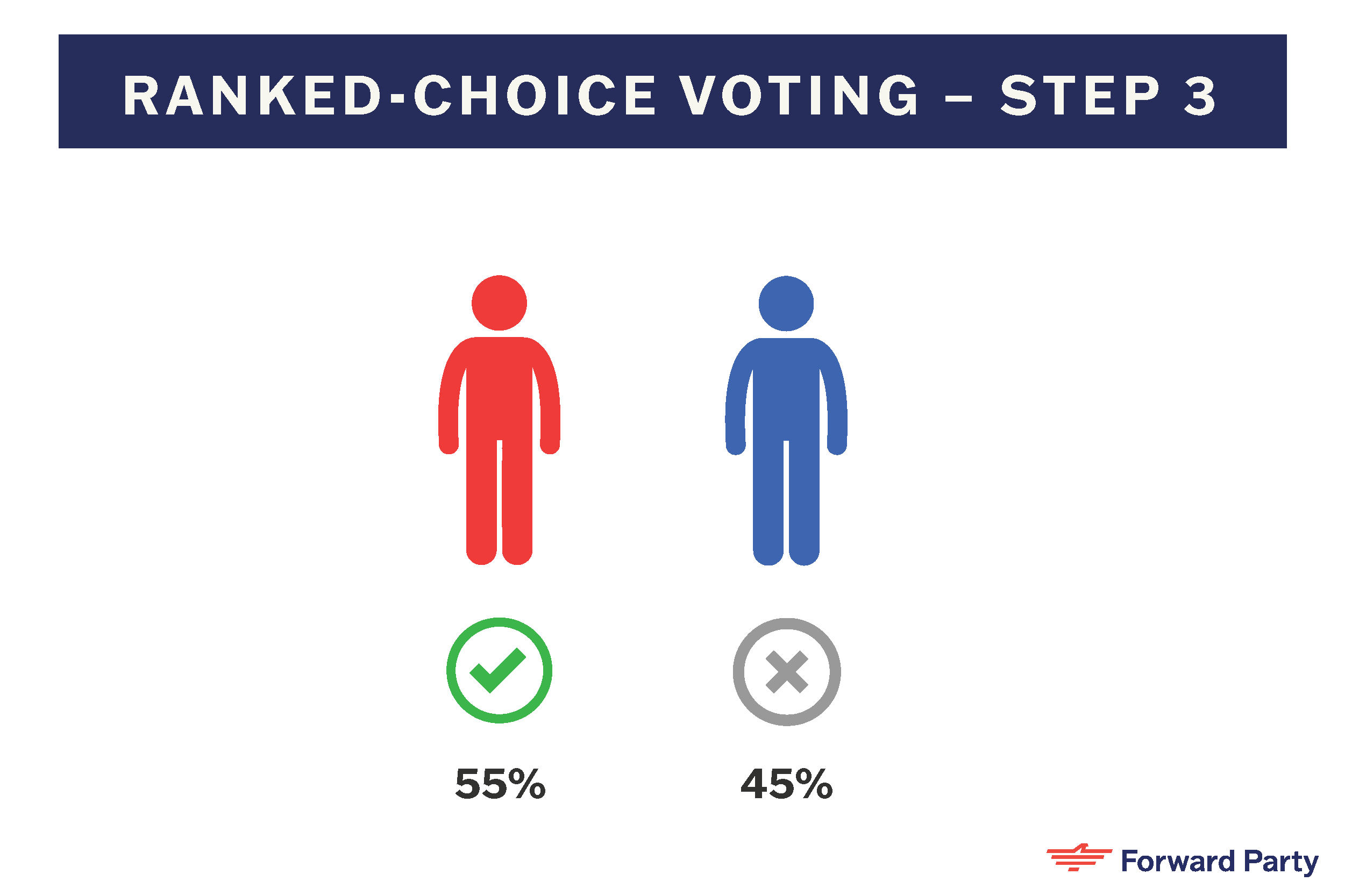 Now we have Red in first place at 55% and Blue in second at 45%!  Just like that, the true voice of the voters won out.  Even though it looked like Blue was ahead at round one (and Blue would have won under our current system), more voters preferred Red to Blue, so it makes sense that Red won in the end.

Sign in with or
Don't have an account? Click here to create one.
Please check your e-mail for a link to activate your account.
Check out @SpenReynolds post about #RankedChoiceVoting via @fwd_party
RCV - Easy As 1, 2, 3
@Fwd_Party is fighting for the American people with practical, common-sense solutions. Join us on the most critical mission of our era - building the foundation for a representative and stable democracy. Not left. Not right. FORWARD.