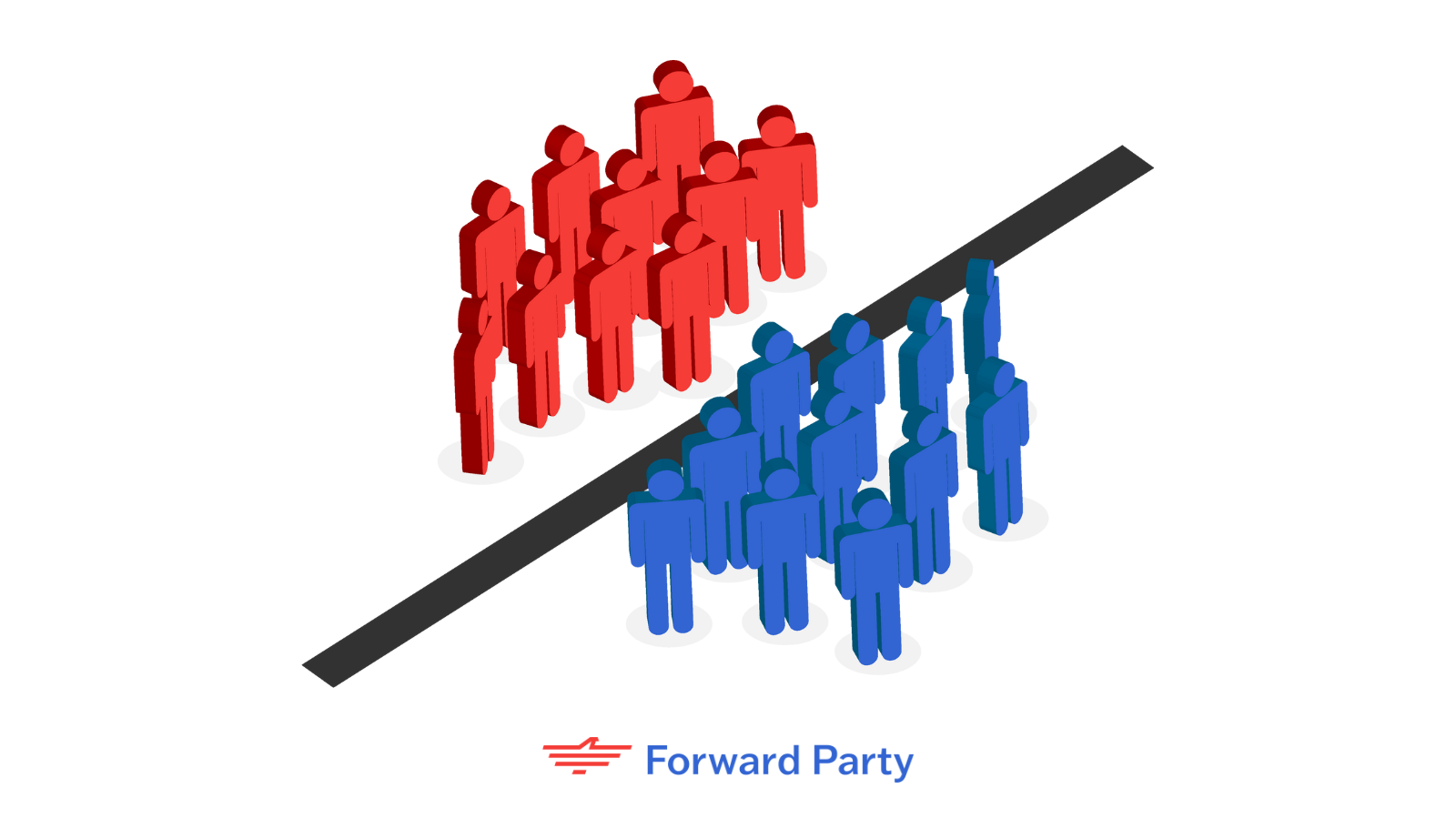 Today’s read is a little long, but it’s important. It’s about the power of stories, and if you’re here reading this, then you’re part of the Forward story. So read on, you might just find out what the next chapter in the story of America is going to be.

Stories matter. Especially the stories we tell ourselves. If any of you have read Yuval Noah Harari’s book “Sapiens,” you know that one of the big things that sets humanity apart from other animals is our ability to tell, understand, believe in, and retell collective stories about ourselves and our groups. These stories create a group identity for our tribes. Years ago, tribe really meant tribe, but that word has changed for many of us to mean the group of people with whom we most closely associate.

It’s through these stories that great deeds can be accomplished. Ancient city-states rose to power through the collective stories they believed about why they were great. Nations formed for the same reason.

America is no different.

We are built on our story.

In the beginning, in our fledgling years after the Revolutionary War, what a story we had to tell. We were the cast-outs, the unwanteds from the most powerful country in the world, sent across the sea to found new colonies. But we grew tired of the tyrannical rule from our British brethren and won our freedom against all odds through grit, determination, and belief in liberty (and maybe a little help from the French, but who remembers?).

In those early days, though, we weren’t Americans. That wasn’t how we identified. We were Virginians, Georgians, and Pennsylvanians. We were New Yorkers, Rhode Islanders, and Massholes (I can say that, I lived there for years). We were separate members of the 13 original states working together as one nation for the collective good. But we were a set of United States. Each state separate from the rest.

It wasn’t until the Civil War that the story began to change. The Civil War built an “America vs. the Confederacy” mindset that began the transition into unity. It created a truly American identity within the parts of the nation that didn’t secede. When America won the war and brought the Confederacy back into the Union, though the divisions ran deep, the foundations of a single nation had been laid. It may have taken decades, but the states that rebelled rejoined a nation that had found national unity, and soon enough, they became part of that union.

The Civil War created a new, unified American identity. No longer did people say, “The United States are…”. They began saying, “The United States is…”. This shift in language unveils a deeper change in our cultural story. We weren’t a collection of independent states striving for the same goal anymore—we weren’t a plural noun. We were a single nation, united in common cause. The United States. We became whole.

Why did the Civil War cause a shift in the American identity?

It gave us an enemy.

It gave us something to fight against that helped us define who we are, because it showed us something we weren’t. I’m not going to sit here and tell you things were all peaches and cream immediately after the Civil War, but it did create the American identity that grew into who we are today.

The World Wars furthered that national story. No longer were we separate states, but now a unified nation fighting against those who sought to unleash evil upon the world. I may be waxing poetic a little here, but this is how we changed and grew into a unified national identity.

After the World Wars came the Cold War era. The nation united against the new enemy, communism. We fought it in Korea, in Vietnam (sort of), and through proxy wars and covert operations against Russia. Eventually we won, and emerged in the latter part of the 20th century as the sole superpower on the world stage.

This singular identity was easy to see in pop culture. When we entered the Cold War, from the safety of our American cinema and pop culture, we solidified our shared identity in the face of the Soviet threat. In that time, we celebrated heroes, real and fictional, that took on the USSR—we all  became Rocky, Jack Ryan, and even Ronald Reagan in a fight against a common enemy.

Pretty soon that began to change.

We didn’t have an “enemy” anymore. With no global enemy to point to in order to make us the heroes in our own story, we began to look inward. We began to fight ourselves.

You can see it easily in the way that rhetoric around elections changed in the 1980s and ‘90s. The other party became the enemy. Republicans began to tell you that Democrats were just communists and socialists in disguise, and if you let them win, you’d be giving up the freedoms upon which this country was founded. Democrats began telling you that Republicans were Nazis or the American Taliban, and that if you let them win, they’d strip away the rights of any American who wasn’t a straight, white Evangelical. Each side picked a recent global enemy to paint their political rivals as, to try and cultivate an identity of “us” by defining an enemy of “them.”

This changed our story. No longer was “American” the most important political identifier. “Republican” or “Democrat” became the identity that mattered. Like a VIP card at a fancy club, politics became exclusionary. “Vote for us or you’re a bad person,” they’d say. And we listened.

America has become more tribal. More partisan. More hateful. And it’s because we’re telling ourselves that it’s other everyday Americans who are the bad guys.

But this can change.

We can fix our country.

We can’t erase our past. We have an amazing, awful, deep-seated history through which we identify, and we can’t ignore our past for all its graces and all its faults—and we shouldn’t want to. It’s overcoming these internal faults that make for an epic journey. No beloved hero of any story got to where they are without growing as a person. We can do the same. We can start a new chapter. We can decide how to write our future.

We don’t have to be each other’s enemy.

Everyday Americans with different political views aren’t our enemy. Most of us are just trying to make ends meet and hoping for a better tomorrow. The real enemy is far more sinister. It’s the system that allows political leaders to jealously guard their positions and desperately fight to keep the power they were entrusted with by the people. They ransack our democracy, weaken its bonds and safeguards, destroy its very foundations—all while pointing their finger at the other guy and saying, “It’s him you want. He did this to you.”

The two major parties fight each other, and we all lose. They spend billions on elections and do little once they win except start campaigning for the next one. They write laws that cement their power, and they create rules that make it next to impossible for anyone else to enter the ring.

They’re not interested in good governance. They’re not interested in liberty and justice for all. They’re interested in winning, and nothing else. This is not to say there aren’t good people fighting for the right reasons in either party, far from it. There are wonderful, selfless servant-leaders on both sides of the aisle. But the party leadership? Those who have written the rules of elections to keep out any challenges to their rule? Those that keep more than half the country—every unaffiliated and independent voter—from voting in the primaries? Their only goal is more power, not a better future.

It’s time to change that.

It’s time to write a new story. We know what the real enemy is now. It’s time to fight back.

Check in next week for the next phase of our American story. We’ll look at what the nation will look like when we write a new story and set a new path.

Sign in with or
Don't have an account? Click here to create one.
Please check your e-mail for a link to activate your account.
A New Enemy
A New Enemy
@Fwd_Party is fighting for the American people with practical, common-sense solutions. Join us on the most critical mission of our era - building the foundation for a representative and stable democracy. Not left. Not right. FORWARD.