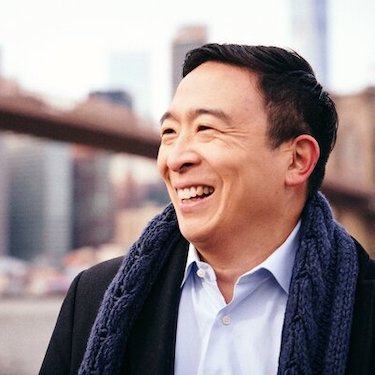 Andrew Yang was a 2020 Democratic presidential candidate and 2021 candidate for mayor of New York City. Named by President Obama as a Presidential Ambassador of Global Entrepreneurship, he is the founder of Humanity Forward and Venture for America. Yang’s New York Times bestselling book The War on Normal People helped introduce the idea of universal basic income into the political mainstream. His recently released book, Forward - Notes on the Future of Our Democracy, outlines forces holding America back from effective governance. In it, he lays out key structural reforms aimed at safeguarding democracy.

Yang is a graduate of Brown University, where he graduated with degrees in economics and political science, and Columbia Law School, where he was an editor of the Law Review. Between campaigns, he focused on providing relief to Americans grappling with the impact of the pandemic, and building relationships with candidates and elected officials across the political spectrum. He lives with his family in New York.

Tweet
Meet Andrew Yang
Meet Andrew Yang
@Fwd_Party is fighting for the American people with practical, common-sense solutions. Join us on the most critical mission of our era - building the foundation for a representative and stable democracy. Not left. Not right. FORWARD.