When the Forward Party entered the political stage in October, 2021, it was with a sense of hope even as the U.S. reeled from the backlash of the 2020 elections and the January 6 insurrection. How can such anger and polarization lead to a movement of hope and optimism?

Lee Drutman, renowned political scientist, published a paper this week called How Democracies Revive that sums it up well. He wrote, “Before we can rebuild our democracy, we first have to acknowledge that it is, in fact, falling apart. And we are indeed starting to realize this – hence the pervasive panic, that repeated prerequisite for reform.” America’s eyes are open to the problems our democracy is facing.

If you're ready to help us fix these problems, consider donating today.

The MATH tells us that Americans are ready for a movement of positivity and collaboration.

The new normal of a consistently high rate of independents gives us cause for optimism. North Carolina and Oregon are showing signs of partisan fatigue with independents now outnumbering either major political party. In both Utah and New York the number of unaffiliated and third party voters is now greater than one of the two major parties.

Our eyes are open. Now we just have to move Forward! 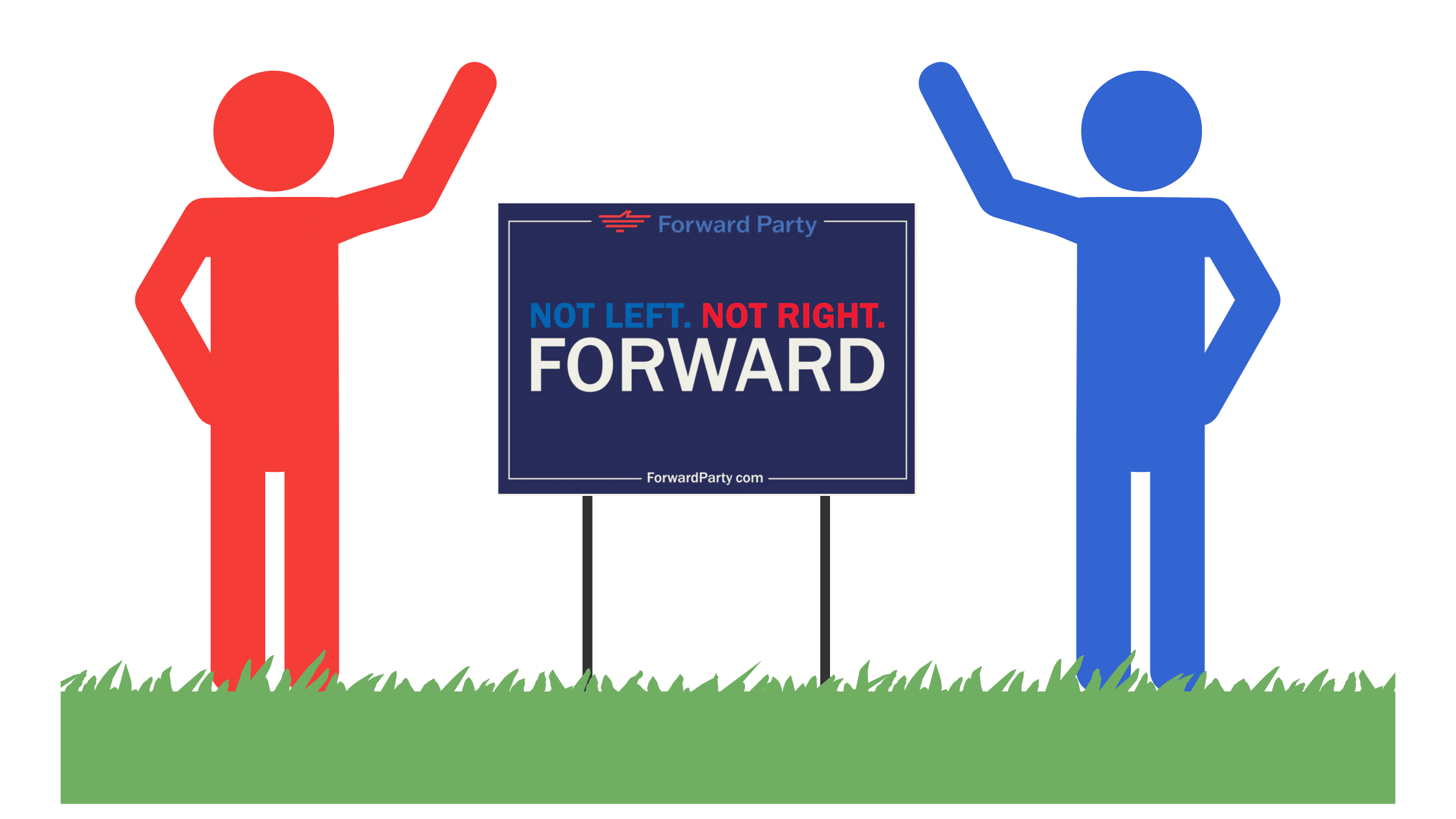 As more Americans recognize the need for a new political system, one thing is for sure - Republicans and Democrats are facing internal unrest. Neither party is satisfying the growing number of Americans more interested in solutions than in partisan politics.

This trend shows up in several ways. On issues related to education, there is a greater generational divide than there is a partisan one. Cross-partisan organizations are bursting onto the scene to get people to talk to each other. A remarkable thing just happened in Utah where Democrats, realizing that their own candidates are longer than long shots, are now backing independent Evan McMullin in the race against Republican Senator Mike Lee. McMullin is running a campaign focused on solutions and democracy reform. If his name sounds familiar, it might be because Andrew Yang recently endorsed McMullin in a letter to his supporters and on Twitter.

Changing the status quo will take a new breed of candidates and we are happy to have started endorsing candidates who will take us forward. In an era when neither side trusts that the other will not work to overturn election results, providing a new, trusted outsider party might be the best solution.

The war in Ukraine underscores a moment of democratic crisis. Democracy is under duress across the world. A new report from Freedom House, a think tank that tracks democracy around the world, finds that only six of 29 countries from Central Europe to Central Asia are maintaining a “consolidated” democracy. Most, they find, are drifting “toward authoritarianism or a bleak gray zone where the trappings of democracy truss up illiberal or autocratic political projects.” Is the U.S. showing signs of that kind of gray zone? It's certain that the manipulation of democratic processes has weakened our electoral system and undermined the integrity of our representation.

Even our veterans worry that they fought for democracy abroad only to return to home finding that the greatest threat to democracy comes from within.

In California, a repeal effort aimed at ranked-choice voting was voted down in the State Assembly, leaving RCV in place where it is currently implemented and giving hope for new cities looking to enact electoral reform. On top of that good news, the RCV movement has had two other significant legislative wins in recent weeks. Missouri and Nevada are also moving forward with initiatives that will place ranked-choice voting on the ballot provided they meet the requirements. Both have made great headway and are poised to reach the goal.

Alaska is an exciting frontier for RCV where it will be used this year in all state and federal elections. A bill in the Hawaii state legislature is moving towards adopting ranked-choice voting. We are also encouraged by the number of op-ed and letters to the editor across the country advocating for ranked-choice voting. From San Diego to Cedar Rapids, and from Chicago to Montana, ranked-choice voting is having far more than a moment!

Maine, Utah, and California are doubling down on ranked choice voting with bills allowing towns and cities to opt into RCV or pilot the voting reform.

The declining number of competitive districts in America has been in the news since redistricting started this cycle, and FiveThirtyEight now rates only 8% of Congressional districts as “highly competitive.” At the state level, nearly 30% of state legislators did not even face an opponent in 2020. All this is reducing our ability to hold our representatives accountable for solutions.

Gerrymandering is the new normal. Primaries are underway, and time is running out on the redistricting clock. In Alabama, despite a lower court ruling against new maps, the State Supreme Court upheld them claiming not that the maps were appropriate, but that changing them would cause too much confusion in upcoming elections.

State court responses to gerrymandering reveals stark disparities in the handling of such cases. While courts in North Caro­lina, Arizona, Mary­land, and New York have all recently struck down legis­lat­ive maps for partisan gerry­man­der­ing, some states are deferring to state legislatures and bowing out of questions on redistricting.

Partisanship in Congress means that even when both sides agree on a problem and a solution, legislation might not be successful.

Fixing the shortages of semiconductor chips is a high priority for both parties, but by tacking on unrelated provisions opposed by Republicans, Democrats are jeopardizing the legislation.

Partisanship has led to a decline in trust in our government, our courts — we can now add the Security and Exchange Commission to the list of institutions falling prey. The agency’s history of bipartisan and unanimous votes used to suggest that “greater attention was given to all viewpoints … a hallmark of administrative law,” but growing dissension indicates that partisanship is seeping in.

Last month, a Gallup poll found that 76% of Americans disapprove of Congress, citing them for being out of touch with their constituents, ignoring public opinion, and listening only to lobbyists and wealthy donors.

Sensible reforms could help increase trust in government. We're working on that.

Thanks for reading. Email comments to us at [email protected]. We’d love to hear what you think!

Sign in with or
Don't have an account? Click here to create one.
Please check your e-mail for a link to activate your account.
Newsletter 4/27/2022
Newsletter 4/27/2022
@Fwd_Party is fighting for the American people with practical, common-sense solutions. Join us on the most critical mission of our era - building the foundation for a representative and stable democracy. Not left. Not right. FORWARD.