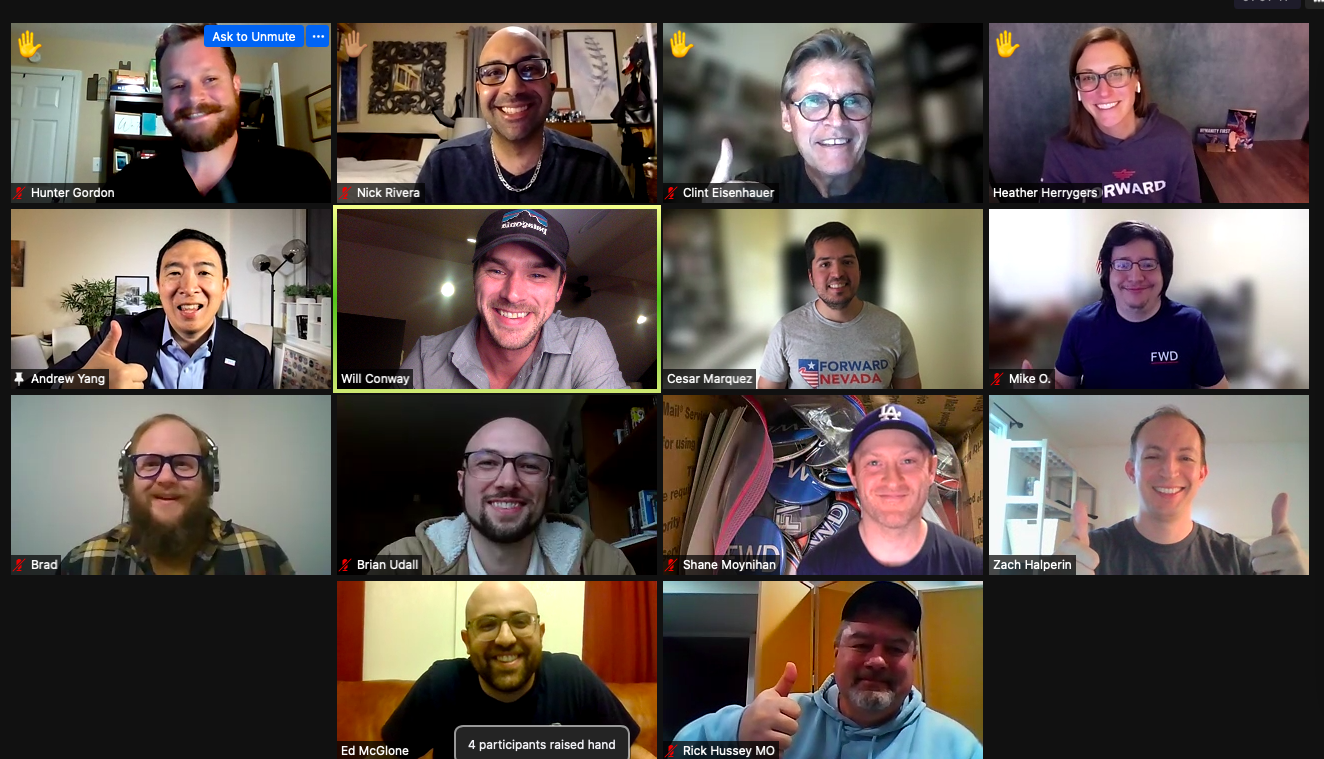 If we want to truly achieve the things we're setting out to achieve - things like passing election reform nationally that incentivizes our politicians to do better, building a national party that topples the duopoly, and modernizing our archaic government - then there's one resource we need more than anything else. No, it's not money: it's people. We need to build a bottom-up movement of thousands of activists in every state in the country who will work to change our broken system.

As you may have noticed on Your Dashboard, the people who use their recruiter link to invite the most new Forwardists each month hang on a Zoom call with Andrew Yang. Well, last night, the meeting happened with those who recruited the most for the month of March. I want to take a moment to say thank you, but also to explain why this program is so important.

Firstly, thank you to this month's top recruiters:

In March, 98 activists recruited 404 new Forwardists. The 23 people invited to last night's meeting personally recruited 253 of them. So here's the math: on average, our top recruiters 11x'd their impact.

But here's a little more math: at the top of Your Dashboard, you see a number, right? A certain number of citizens working to fix our democracy? That number updates about every fifteen minutes as our movement grows - as I type this, it says 20,651. 23 people, in one month, brought in 253 new Forwardists. 253/20,651 = 1.2%. So these 23 people, in just the month of March, grew the foundation of a national political movement by more than 1%.

That might feel small, but think about what we're saying here: a number of people who can fit on a school bus - in 30 days - moved the needle by a full percentage point.

That's an enormous amount of growth. But here's something else: they didn't even recruit that many people! The barrier to join this call was just six recruits. These people shared a link via email, text and social media, and got six people fired up enough to join the Forward Party.

Here's something I know for sure: we all know six people who should be Forwardists. Six people who are politically homeless, frustrated by our hyper-partisan, do-nothing duopoly, and who wish the conversation could be just a little bit different.

There are two weeks left in April: let's see if we can find our six before the calendar flips to May. Use your recruiter link and invite your six people, and I'll see you on next month's call.

Not just a new party - a new *kind* of party. Let's change politics together.

Sign in with or
Don't have an account? Click here to create one.
Please check your e-mail for a link to activate your account.
This is pretty cool! @AndrewYang meets with the top @FWD_Party activists each month. Learn more:
Andrew Yang Thanks Top Activists from March
@Fwd_Party is fighting for the American people with practical, common-sense solutions. Join us on the most critical mission of our era - building the foundation for a representative and stable democracy. Not left. Not right. FORWARD.