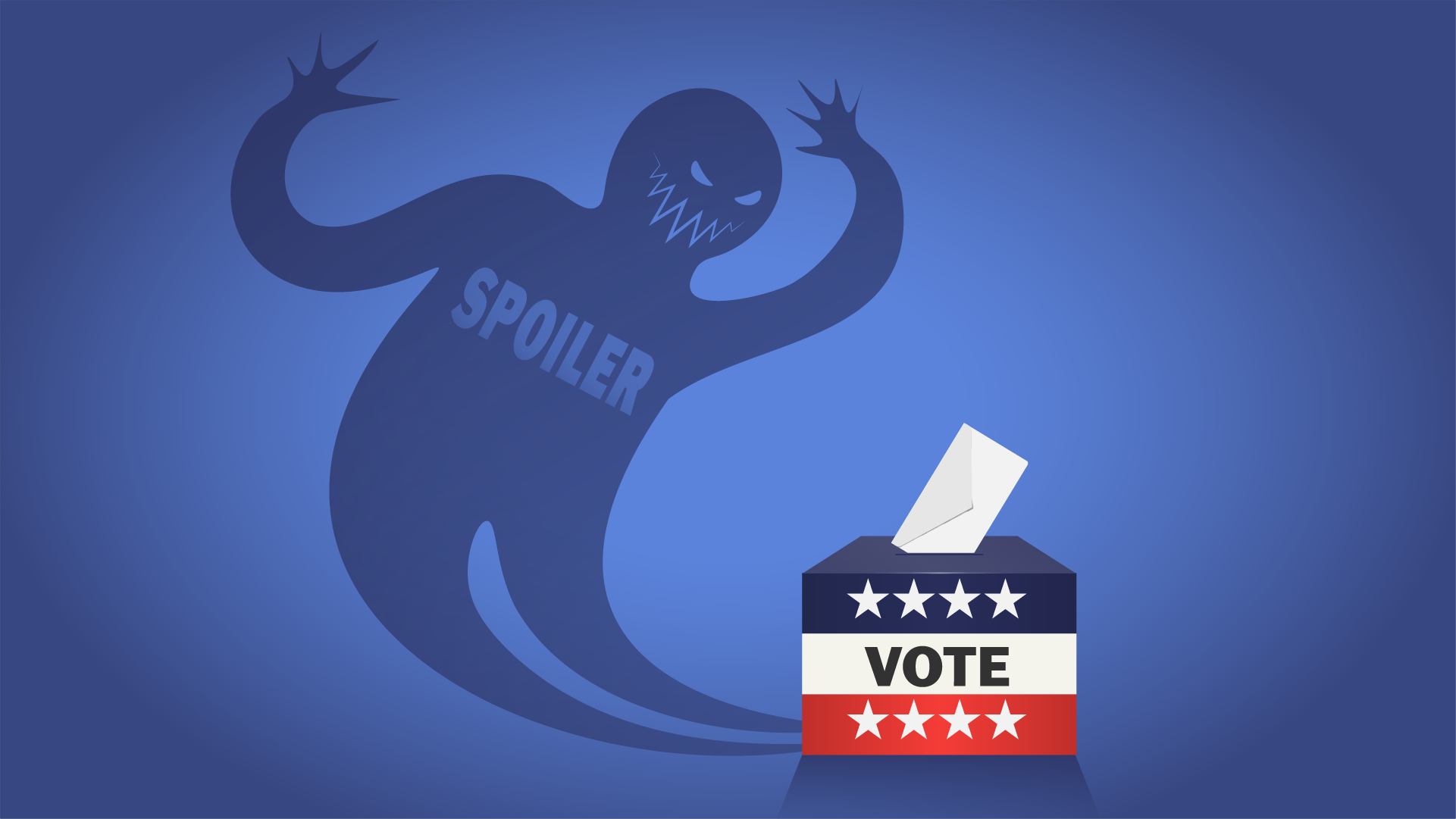 In 1992, Texas business magnate Ross Perot delivered the strongest third-party presidential showing of the televised era, earning his Reform Party nearly 20 million votes, almost 20% of the popular tally, on election night. But in the eyes of popular pundits and commentators of the time, Perot’s campaign wasn’t seen as a sign of things to come or a wakeup call for the two major parties.

Instead, Perot was labeled a spoiler.

Never mind that exit polls from that year showed that 38% of Perot voters would have voted for George H.W. Bush and 43% would have voted for eventual winner Bill Clinton, illustrating that the outcome would have been no different without the Perot factor. Additionally, if Perot hadn’t run 24%, almost five million people, wouldn’t have voted at all. That didn’t seem to matter. The label stuck, and when the next big-name third-party contender, the Green Party’s Ralph Nader, ended up making the difference in the razor-thin 2000 election, the idea of this spoiler effect exploded, creating a specter that would loom over every Independent and minor-party effort of the new millennium.

When combined with the partisan hatred that our major parties work so hard to sow and grow, this spoiler effect becomes a potent fear factor, a tool to keep voters anchored in the status quo. It doesn’t seem to matter that 62% of Americans want a viable third party, or that 61% feel neither major political party represents them - with the system structured as it is, the spoiler effect simply looms too large for the duopoly to be challenged.

From where we stand, this bogeyman is glaring evidence of what’s wrong with American politics today. It's a way for division to breed more division, for our cycles of corruption and partisan animosity to perpetuate themselves.

Now, to be fair, Presidential races since 2000 have continued to be very close - that’s the nature of the Electoral College, where tightly divided swing states can make a huge difference. But in Congressional and local races, where Independents and outsider candidates are branded with much of the same spoiler stigma, the story is wildly different.

As of the 2022 redistricting, only about 7% of Congressional districts are considered highly competitive, and just about 5% are considered fairly competitive. That means that in about 88% of general elections at the federal level, there’s really only one candidate with a chance to win - and in 2018, 42 of these presumptive favorites ran entirely without opposition. In races like these, there is no contest to spoil. In fact, there’s no contest at all. In 2020, nearly 75% of local races offered just one choice on the ballot. With gerrymandered districts and no-contest elections, independent and third-party candidates may be our only chance to improve representation and preserve democracy.

So why do partisan media insist on this idea that third-party interlopers would be dangerous spoilers? That reason is simple - fear. It is a bogeyman that has been propped up to hide the real monster in our elections - a two-party system that would rather have people reluctantly vote for their candidate than give options to better represent those voters. As their popularity plummets, our major parties disengage and disenfranchise millions of voters to maintain their stranglehold. They do this by: 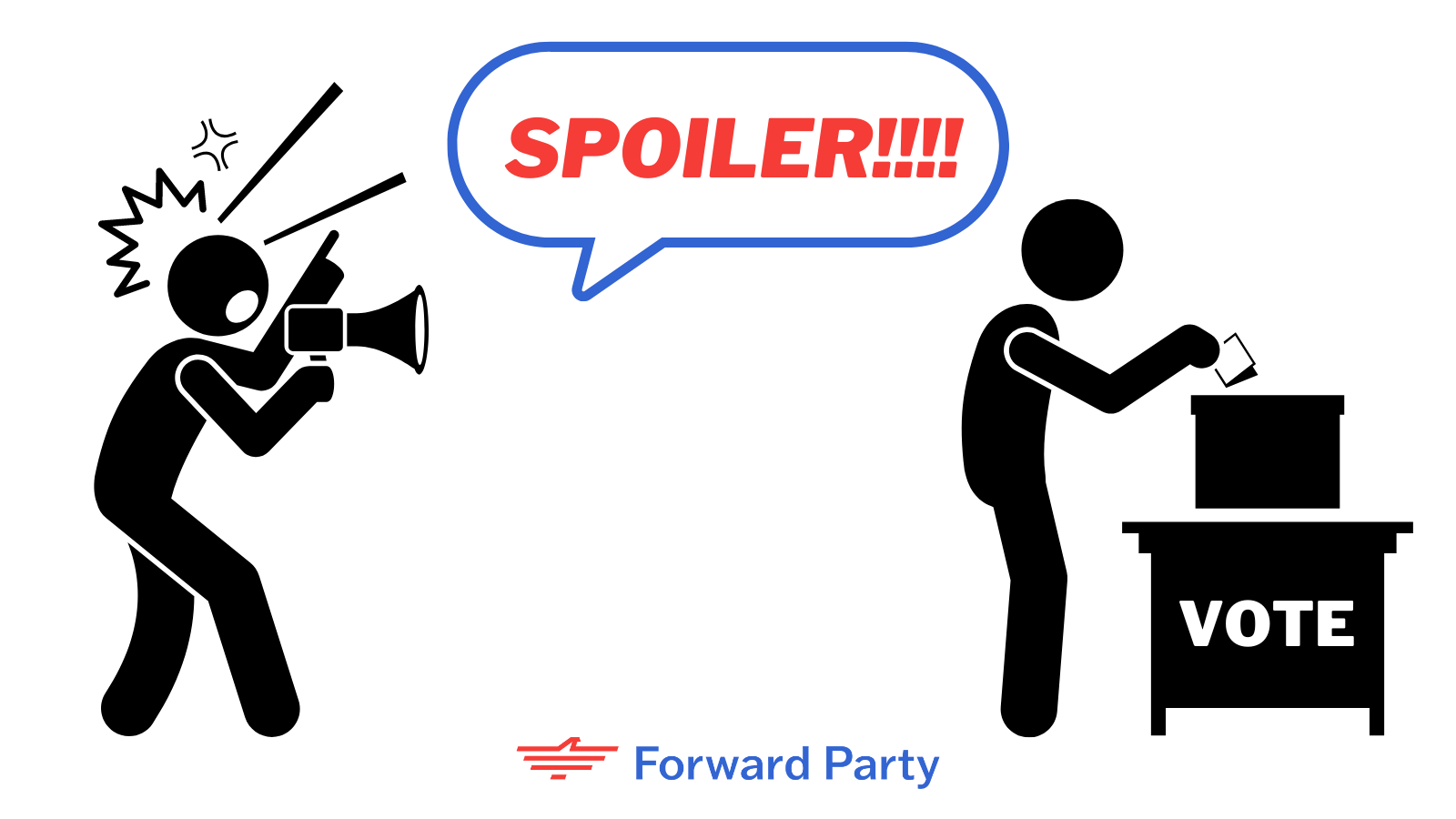 That’s where we come in. The Forward Party is a new kind of party - ambitious and ready to lay the groundwork to celebrate America's natural abundance, innovation, and humanity. Democracy reforms can remedy the potential for a spoiler, scaring voters away from voting their conscience, but the real benefits are their proven ability to increase the electability of grassroots candidates, increase representation among minority populations and women, and increase the engagement of voters.

We want everyone to be represented and engaged in the political process. But democracy reform takes time, and during that time, it’s important not to allow capable independent thinkers with powerful messages to be held back by this spoiler effect bogeyman.

With your help, we will elect candidates who will reshape our political culture, implement important electoral reforms to create better representation and accountability, and show the nation that the system can change for the better. Because we believe that America’s voters should go to the voting booths with their heads held high and nothing to fear.

A special thank you to co-author, Nathan Smolensky - Forward activist and writer.

Sign in with or
Don't have an account? Click here to create one.
Please check your e-mail for a link to activate your account.
The Spoiler Effect - From where we stand, this bogeyman is glaring evidence of what’s wrong with American politics today, a way for division to breed more division, for our cycles of corruption and partisan animosity to perpetuate themselves.
The Spoiler Effect
@Fwd_Party is fighting for the American people with practical, common-sense solutions. Join us on the most critical mission of our era - building the foundation for a representative and stable democracy. Not left. Not right. FORWARD.