That wasn’t the headline in most papers. The bill’s primary purpose, according to the news, was to create an election police force and place controls on ballot harvesting. In fact, in many articles, the RCV ban wasn't even addressed.

While ranked-choice voting is growing, it’s not a hot button topic that most voters are tuned in to. So how did ranked-choice voting, a nonpartisan voting reform still unknown to most Americans, get lumped into a bill dealing with election fraud and ballot-harvesting?

Because RCV poses a threat to the power of the two major parties to control elections, they wanted to hide it in a bill that they could sell to the public for other reasons.

Florida is now the second state to ban RCV, following in the footsteps of Tennessee. In both states, the legislation overturns the will of voters. Both Memphis, TN, and Sarasota, FL, had voted in favor of local implementation of ranked-choice voting; but the state legislatures of Florida and Tennessee seem to think their voices are more important than the voters’. 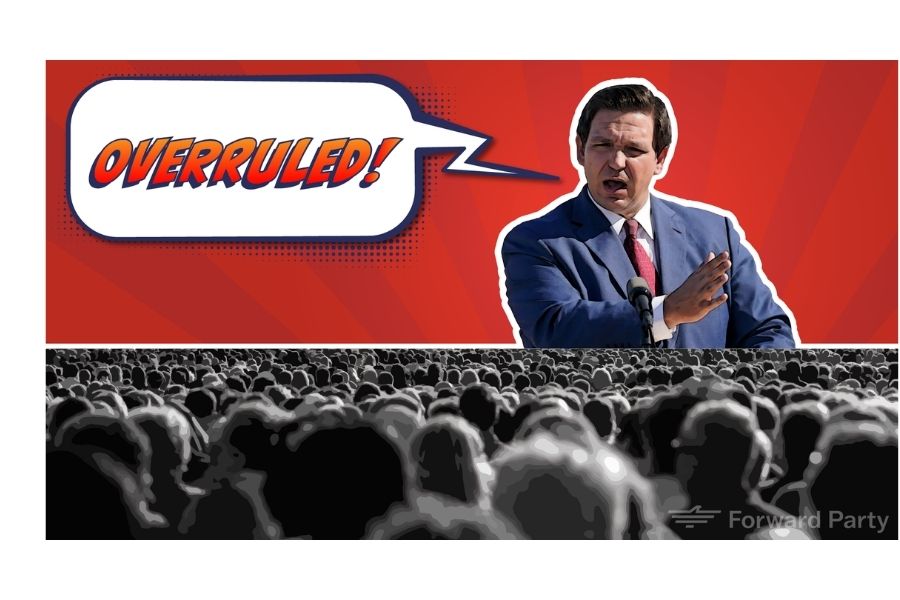 Polls following implementation of RCV in New York City demonstrate satisfaction with the shift to RCV. Alaska is about to undergo the most wide scale implementation of RCV in the nation. The reform is building strength, but partisan politicians are seizing the moment to outlaw it before the movement can gain too much momentum. That’s why the Forward Party is working as fast as we can!

While these assaults on RCV are troubling, there is hopeful news, coming from places such as Oregon, Nevada, and Missouri.

These states are close to getting RCV ballot initiatives on the November ballot - though the Missouri state House has just passed a bill that would put banning RCV on the ballot, as well. Voters in all three states will have the chance to vote on open primaries and/or expand ranked-choice voting.

The benefits of ranked-choice voting—such as addressing the spoiler effect of third party candidates, expanding voter choice, and getting candidates who appeal to a broader number of voters elected—would seem like a no-brainer. So, what do major parties have against RCV?

The bottom line: Democratic and Republican parties have mastered control over elections in the current system, and RCV changes the game.

While these bans are coming from Republican states, other red states are at the forefront of ranked-choice voting, with Alaska in the lead. Many of the states where RCV is expanding fastest are states with large numbers of independent voters—a group that grows bigger every year as more and more are disaffected with the duopoly. The Utah Republican Party uses RCV in its primary elections when they have three or more candidates. This is a cross-partisan reform—one that returns power to the voters and takes it away from a centralized group.

Partisan legislatures understand that any electoral reform throws a monkey wrench in their scheme to maintain the advantage they have through plurality voting and party-based redistricting.

John McCain once said that instant runoff voting—including an implementation such as RCV—would “lead to good government because voters will elect leaders who have the support of a majority. Elected leaders will be more likely to listen to all and cities will be able to enjoy big tax savings and keep majority rule.” Another conservative, Adam Kissel, a former member of the Trump administration, wrote, “Conservatives should let cities try RCV because it is consistent with the conservative principles of home rule and local control.”

RCV is not left nor right—it’s just plain good policy. (You thought we were going to say something else there, didn't you?)

The attacks are making our work ever more urgent. Join your Forward Party state team and spread the word that we are the only political party invested in the initiatives that put voters first.

With every state that bans ranked-choice voting, our fight against the two-party system becomes even more urgent.

Sign in with or
Don't have an account? Click here to create one.
Please check your e-mail for a link to activate your account.
CHALLENGE ACCEPTED
CHALLENGE ACCEPTED
@Fwd_Party is fighting for the American people with practical, common-sense solutions. Join us on the most critical mission of our era - building the foundation for a representative and stable democracy. Not left. Not right. FORWARD.